MADE FOR FASHION PAIRS LEADING FASHION DESIGNERS AND MAKEUP ARTISTS FOR A CANDID CONVERSATION ABOUT CREATIVITY, COLLABORATION AND CATWALKS

Autumn/Winter 2015 saw a welcome return to the London Fashion Week schedule – Gareth Pugh back in his home city for the first time since 2008. The show did not disappoint and came with Pugh’s now signature sense of drama and mysticism. Models were warriors in Britannia-inspired outfits ready for battle, complete with Beefeater hats and mohican’d helmets. The ode to the ancient history of Britain was completed with a strong makeup look from Alex Box – each girl had the St George’s cross daubed across their face. The result? A completely unforgettable fashion moment.

Not that we should be surprised – Pugh and Box are pros at this kind of stuff by now, with Box part of Pugh’s longstanding team that also numbers stylist Katie Shillingford and musical director Matthew Stone. They have worked together for ten years creating special shows, ever since Pugh’s second-ever runway outing in 2005. Here, the collaborators talk about their working relationship, shared spirit and how, by now, they are truly a fashion family.

Gareth: I remember having a conversation with [stylist and Lady Gaga collaborator] Nicola Formichetti after my first show with Fashion East, and we were talking about who would be doing the makeup for my second show. Nicola mentioned this amazing girl who does all these weird and wonderful things. It turned out that was Alex.

Alex: I had already worked with Nicola at Dazed & Confused a bit. He was finding his feet as well, and it was one of the first shows he styled. Looking back, it was right place, right time stuff, but Nicola is very good at galvanizing relationships. That’s one of his strengths – putting us together made complete sense. Our spirit is the same, our backgrounds are very similar. Our sensibility and aesthetic, without having the same influences, are very complementary. I feel that with Gareth, when we work together, there’s also a lot of trust and that’s probably because of all the time we have shared. I trust where he’s going to take me and I think he trusts where I’m going to take him. 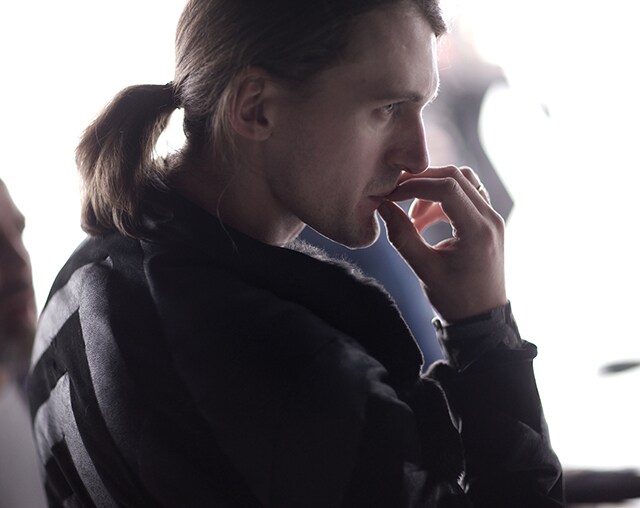 Gareth: Alex can do a very beautiful, refined look, but in the same breath do something completely off the wall. So, I feel there's a great synergy there. I love combining two opposing, seemingly disparate elements – the friction this creates can sometimes be electric. We’re kindred spirits in that respect.

Alex: I like to respond to the girl. If something isn’t working on a girl, I’ll change it to suit her because I always want to feel their spirit through the makeup. That’s true with whatever makeup I’m doing. I never want to feel like I have a cookie cutter.

“I always think of what I do as armour, and makeup is part of that, it’s creating a barrier between you and the world.” – Gareth Pugh

Gareth: I remember SS13, we had just done a walkthrough, and Alex grabbed me and Katie and showed us this glistening tear she put on a model. It was a tiny alteration that we hadn’t planned for, but it completely changed the whole dynamic of the show. We had this track that was incredibly mournful – a raw a cappella of Roy Orbison’s “Crying,” sung in Spanish – and during the show the weather changed dramatically, with rain battering down on the huge glass roof of the Palais de Tokyo. It was such an intense moment and the tear was a subtle, yet integral, part of that.

Alex: To be able to feel you’re safe enough to suggest ideas without fear of a committee is really lovely, and the fact that Gareth is open to that. A lot of designers wouldn’t be. Most people want to know something is in the bag, and the process isn’t as fluid. I was looking back at that first Fashion East show recently and it’s funny, because that same excitement and spirit is still there – I’m always still incredibly excited to see what you’re going to do. I feel very defensive and proud. I feel like it’s family, like there's a collective consciousness.

Gareth: Exactly. And that spirit was in the collection this time. I was thinking about the idea of sacrificing yourself to something that is bigger than you, a ceremonial act. There are a lot of motifs that hint of the idea of stripping yourself of your own identity and signing up for something tumultuous and beyond anybody as an individual, towards a group mentality. The look of the show comes off as quite aggressive, but what I don’t like about the word aggressive is that it implies a state of mind that can go back to muted volume, whereas what I see it as is a state of being. It’s not being aggressive for that moment, it underlies everything. The makeup is an integral part of that, actually, maybe more so than it’s ever been. Alex: It’s about how you would get ready for battle – sacred but also vicious. The deliberate viciousness of the mark is a very powerful statement. There’s nothing ethereal about it, it’s like screaming in someone’s face.

Gareth: That’s what I like about makeup. I always think of what I do as armour, and makeup is part of that, it’s creating a barrier between you and the world. It’s what Alex always says…

Alex: What do I say? Yeah, that makeup is about concealing or revealing. It’s the power to change who you are.

Gareth: And that’s what we do with our clothes. It’s transformation and fantasy, and that escapism is in the makeup too.